Sinbad Sports is hosting a VIP Autograph Signing with NFL Legend Philadelphia Eagle Wide Receiver Vince "Invincible" Papale. Sinbad Sports is honored to host one of the greatest inspiring people with one of the most amazing stories in the history of football. His story was the inspiration for the movie Invincible featuring Mark Walberg. Vince Papale will be signing autographs and taking photos with fans. Tickets and information will be available on www.sinbadsports.com 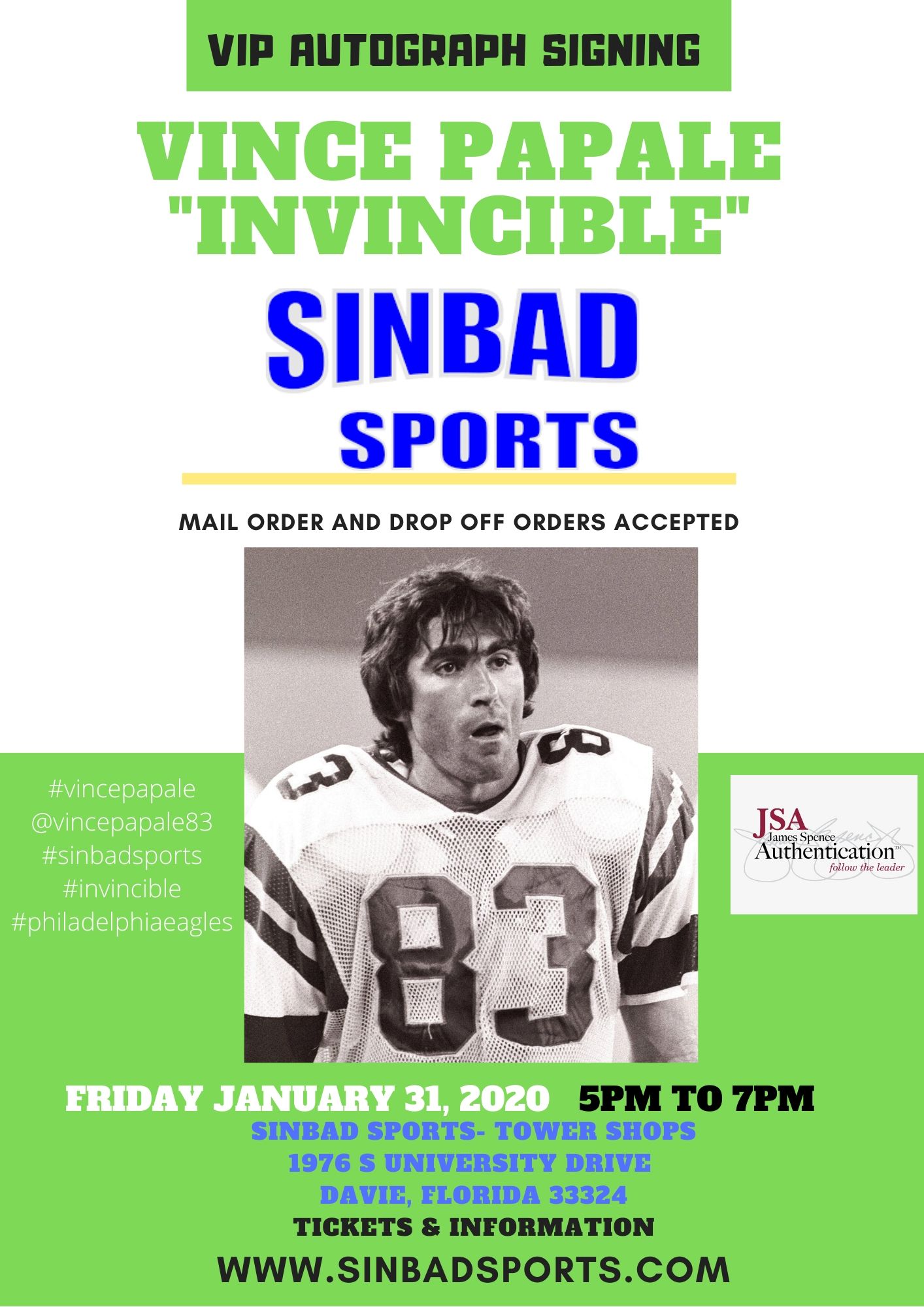 Some of Hollywood’s most inspirational movies were born from the world of sports. One in particular inspired not only sports fans but anyone with a pulse. In 2006 Walt Disney Pictures continued their triumphant tradition of motivating sports stories with the release of INVINCIBLE. It’s a stirring football drama starring Mark Wahlberg as Vince Papale, an ordinary guy who, against all odds, takes his shot at every fan’s fantasy of going from the grandstands to the gridiron. It has been described that Papale’s odds of achieving his wildest lifelong dream of playing for the Eagles as “one in a gazillion!”

It was 1976 when this 30 year old, a teacher and coach at his HS Alma mater, part-time bartender and die hard Eagles fan decided to act on a whim and a dare and entered the unprecedented public tryouts for his beloved Eagles. Inspired by this quote from his high school coach mentor, “Happy are those who dream dreams and are willing to pay the price to make those dreams come true”, he figured he had nothing to lose. Papale, a ten year season ticket holder and former track star who did not play a down of college football, not only paid the price and made the cut . . . he made history!

It was a time when Philadelphia fans were buried in 11 years of defeat, when Americans were battling the lingering effects of Watergate, the Vietnam War and a sweeping energy crisis. Ordinary people appeared badly in need of a champion from their ranks and Vince answered the call. Now, in today’s uncertain economic times he continues to respond to the need for a motivating hero who knows what it’s like to battle and overcome adversity.

Instantly electrifying the fans and eventually winning over skeptical teammates with his gritty play, Papale helped the Eagles rediscover their winning ways. From being voted Special Teams Captain by his teammates to earning Eagles “man of the Year’ in 1978 for his numerous charitable activities Papale was an NFL sensation until a shoulder injury ended his playing career in 1979. Having now added “cancer survivor” to his bio, Papale continues to hold the record for being the oldest rookie in the National Football League (kickers excluded). He was recently honored by the Eagles and their fans and was named “Most Outstanding Special Teams Player” during a celebration of the Philadelphia Eagles 75th anniversary.

“Not often can a person see a film made about their own life’s journey,” Papale said of Invincible. “What’s even rarer is having that movie described as inspirational, motivational, and giving hope. There’s a feeling of intense pride and humility that, at times, is overwhelming.”

Vince is married to former US World Team Gymnast, Janet Cantwell, and they reside in Cherry Hill, NJ, with their two children Gabriella and Vincent. Today, he electrifies audiences and is regarded as one of the top motivational speakers on the country. The ultimate underdog continues to thrill audiences with his energy and humor.