Scroll Down & Click below to Purchase Items from this Signing

Sinbad Sports was honored to host 2 of the most honored receivers in Miami Dolphins history: The Marks Brothers Mark Duper & Mark Clayton. They were signing autographs, taking photos and hanging out with fans. January 31, 2020 at Sinbad Sports.

It's not very often a quarterback as talented as Miami Dolphins legend Dan Marino comes along in the NFL. Equally rare is a Hall of Fame level quarterback having two prolific wide receivers to throw to. But that's a luxury Marino and Dolphins fans enjoyed throughout the 1980's with the "Marks Brothers," Mark Clayton and Mark Duper.

Lining up opposite Duper for the Dolphins was Mark Clayton. After being drafted in the eighth round of the 1983 NFL Draft, Clayton quickly became one of Marino's favorite targets. In 1984, Clayton set the record for most touchdown catches in a single season with 18. He was named to five Pro Bowls with his final Pro Bowl nod coming in 1991. Clayton is ranked in the top 50 for receiving yards and receiving touchdowns. 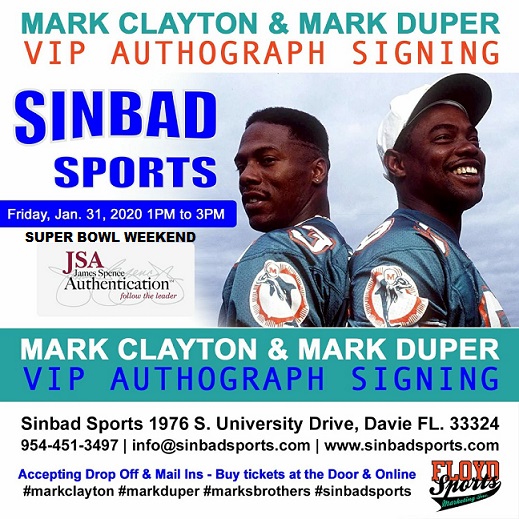